An event every month that begins at 6:30 pm on day Second of the month, repeating until January 8, 2024 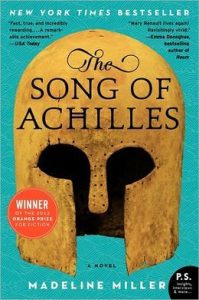 The Song of Achilles by Madeline Miller
Monday, June 13
Hosted by Rebecca Kuzma | Facilitated by Melissa Patterson
Register Here
Achilles, “the best of all the Greeks,” son of the cruel sea goddess Thetis and the legendary king Peleus, is strong, swift, and beautiful, irresistible to all who meet him. Patroclus is an awkward young prince, exiled from his homeland after an act of shocking violence. Brought together by chance, they forge an inseparable bond, despite risking the gods’ wrath.
They are trained by the centaur Chiron in the arts of war and medicine, but when word comes that Helen of Sparta has been kidnapped, all the heroes of Greece are called upon to lay siege to Troy in her name. Seduced by the promise of a glorious destiny, Achilles joins their cause, and torn between love and fear for his friend, Patroclus follows. Little do they know that the cruel Fates will test them both as never before and demand a terrible sacrifice.
Register Here