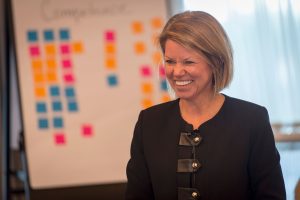 Don’t be nice.
Be kind instead.

Don’t be nice. Be kind instead.
At our NYC alumni dinner recently, Mary Ann Jackson, an executive from Prudential, made the comment, “There is a difference between ‘being nice’ and ‘being kind.’”

I was intrigued. “Give me an example,” I asked her – and the conversation took off from there.

Nice and kind look similar at first, but most of the people agree they differ in theory as well as practice. The two words both describe positive ways of relating to other people, but they diverge in intent. A friend of mine summed it up perfectly:

Nice is an auto response; kind is an intentional act. Because of this, kindness is authentic; niceness can be construed as (or even be) inauthentic.

Think about it. While being nice can be a positive quality, it can be used in a negative context as well. The term “Minnesota nice” was brought up in our discussion, which infers a passive aggressive reserved personality (no offense to Minnesota!). Someone can be polite, but it’s not grounded in genuine good feeling. They are simply following expected social norms.

This is why if I made air quotes around someone being “nice,” you would immediately know what I meant. It was performative; they didn’t really mean it. However, performative kindness doesn’t exist because kindness is all about intention + action.

Kindness is grounded in action.

Nice is wishing someone Happy Birthday; kind is getting them a gift or card.

Unlike when someone is just being nice, kindness is almost always accompanied by an act of service. Seeing someone struggling with a heavy bag and asking them if they need help while staying seated in your row is nice. Lifting the bag up and putting it in the overhead bin is kind.

One of the participants in the dinner had a wonderful example to illustrate this concept. Milena Gashkevich, VP of Human Resources with Prudential Financial, told us that her home had been flooded during Hurricane Ida. The experience was devastating from losing cherished possessions to having to demolish and rebuild their home.

During that time, so many people called and asked how they could help. However, Milena didn’t know where to start or how to even ask for what she needed. But she was amazed at the number of people who just showed up, unasked, and started to sort through debris or bring her family food and clothes and essentials. “We surely appreciated every single thing that people did. My lesson to my kids and for the rest of my life was: you have to do something to help, not just say it, or call and check in, but actually do – regardless of how big or how small.”

A kind culture is better than a nice one.

While leaping into action and being kind is important in our personal lives, it can have consequences for our work cultures as well.

Patrick Lencioni in The Five Dysfunctions of a Team explains the difference between the two concepts when it comes to giving feedback. Oftentimes people want to be “nice” and not run the risk of hurting someone’s feelings or creating an uncomfortable situation. In reality, that’s actually unkind. In this instance, being kind is having the courage to share honest feedback in a benevolent manner so the recipient is made aware of opportunities for improvement.

The opportunity for improvement is like the green piece of food stuck in someone’s teeth. It might feel nice to avoid telling them and embarrassing them in the moment. But how much worse is it for the issue to go unnamed only to find out about it later and wonder how many people saw it before you could do something about it?

Challenge yourself to be kind.

When you feel yourself leaning into being nice, challenge yourself to take action. If you have feedback you could give someone, give it to them. If you have something to say in a meeting, don’t save it for the backchannel discussion later. This dynamic undermines the meeting and keeps people from having a healthy debate. The result is that progress stalls and innovation doesn’t happen.

Don’t allow yourself to be so nice that you end up being unkind.

Be intentional. Take action. Be kind.